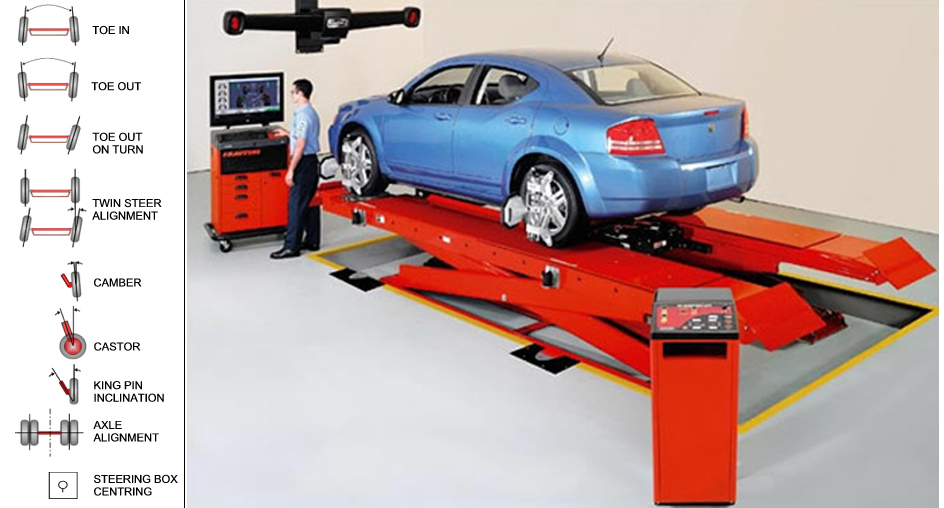 Wheel alignment sometimes referred to as tracking, is part of standard automobile maintenance that consists of adjusting the angles of the wheels so that they are set to the car maker’s specification. The purpose of these adjustments is to reduce tire wear, and to ensure that vehicle travel, is straight and true (without “pulling” to one side). Alignment angles can also be altered beyond the maker’s specifications to obtain a specific handling characteristic. Motorsport and off-road applications may call for angles to be adjusted well beyond “normal” for a variety of reasons

The primary angles are the basic angle alignment of the wheels relative to each other and to the car body. These adjustments are the camber, caster and toe. On some cars, not all of these can be adjusted on every wheel.

These three parameters can be further categorized into front and rear, so summarily the parameters are:

The secondary angles include numerous other adjustments, such as:

A camera unit (sometimes called a “head”) is attached to a specially designed clamp which holds on to a wheel. There are usually four camera units in a wheel alignment system (a camera unit for each wheel). The camera units communicate their physical positioning with respect to other camera units to a central computer which calculates and displays how much the camber, toe and caster are misaligned.

Often with alignment equipment, these “heads” can be a large precision reflector. In this case, the alignment “tower” contains the cameras as well as arrays of LEDs. This system flashes one array of LEDs for each reflector whilst a camera centrally located in the LED array “looks for” an image of the reflectors patterned face. These cameras perform the same function as the other style of alignment equipment, yet alleviate numerous issues prone to relocating a heavy precision camera assembly on each vehicle serviced.

Bad credit or no credit? No problem!

Snap doesn't offer traditional loans. Instead, we offer a consumer lease that allows you to finance the merchandise over 12 months of convenient payments. We also offer a 100-Day payment option, the best terms around. Need new tires for your car? Or need automotive repair? Don't let bad credit stand in your way. Snap is your partner for fast and easy lease-purchase financing. Please apply here https://nxt.to/qdNWBpA

Snap! Finance has the following benefits:

What you will need to apply: